The home of Gospel in the Park features a picnic shelter, stage, and playground.

Pride Park features a picnic shelter, playground, restrooms and an outdoor stage used for events such as the annual Gospel in the Park series.

The park is built on the site of the Hartsville Graded School, the first public school for black children in Hartsville, operating from about 1900 to 1921, as well as the later Butler School, named for the Rev. Henry H. Butler, longtime principal of the school. Park signage and a South Carolina Historical Marker placed at the park also make note of the Rev. T.J. James, who began a Sunday School at the site in 1922 which grew into Mt. Pisgah Presbyterian Church. James also established the Mt. Pisgah Nursery School in the old graded school structure. James’ family donated the land to the City of Hartsville for Pride Park, which was established in 1986.

Learn more about the history of the location at the Darlington County Historical Commission website. 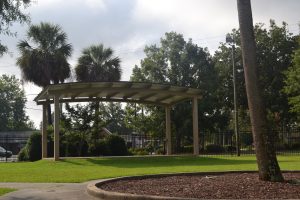 The home of Gospel in the Park features a picnic shelter, stage, and playground.